Filmmaker Ridley Scott returns to the genre he helped define, creating an original science fiction epic set in the most dangerous corners of the universe. The film takes a team of scientists and explorers on a thrilling journey that will test their physical and mental limits and strand them on a distant world, where they will discover the answers to our most profound questions and to life’s ultimate mystery. –20th Century Fox

Prometheus is directed by Ridley Scott who also directed the 1979 classic Alien and he also directed The Martian also involving space.The screenplay is written by Jon Spaihts and Damon Lindelof mostly known for being co-creator of the show Lost. Prometheus is a loose prequel to the Alien series before the beloved Xenomorph was what it was. In Prometheus a group of scientists are looking for their creators and they find them but they also find a weapon the creators whom they call “Engineers” also created to destroy humanity. This weapon is a black goo which basically starts the evolutionary process that created the Xenomorphs we see in the Alien series. I liked this movie, it got a lot of hate from other people but maybe that’s because I’m not a diehard Alien fan. I did just officially see Alien like two days ago. I say official because I saw it when I was ten but couldn’t remember anything so I bought the Alien Anthology, which is really nice collection of all four films, so some possible Alien reviews coming out.

So Prometheus has a pretty good cast, some of my favorites are Michael Fassbender whom I adore as Magneto from the X-Men series and Idris Elba whose accent mesmerizes me and he had a recurring role on one of my favorite shows The Office. The cast also includes Noomi Rapace, Guy Pearce, Charlize Theron and Logan Marshall-Green aka discount Tom Hardy, seriously he looks like a less handsome and muscular Tom Hardy.

Loose summary here for a loose prequel, Elizabeth Shaw (Rapace) and Charlie Holloway (Discount Tom Hardy) are archaeologists who find a star map in Scotland that matches with several other unconnected ancient civilizations, they think that’s an invite from the “Engineers”, our creators. With this information Peter Weyland the CEO of Weyland Corporation, funds an expedition to follow the map.  Weyland should sound familiar if you’ve seen other Alien films. Weyland also sends along David (Fassbender) his “son” an android. So they follow the map to a distant moon LV-223 on their ship Prometheus. On LV-223 they find the Engineers and some black goo, David causes some serious hijinks with the black goo eventually leading to the creation of Xenomorph-like creature. The crew finds the answer to their questions but creates many more questions.

Prometheus was a good watch, quite entertaining, dazzling special effects and an intriguing story. When Prometheus first came out on blu-ray I wanted to buy it, I never did and waited like three years to finally get it, so it was a movie I’ve been meaning to see for a while. One of the best scenes in this movie is when Elizabeth Shaw has been impregnated by the black goo and has an alien fetus growing inside of her, coincidentally enough she says she is infertile beforehand. Anyways she’s got this squid looking thing squirming around inside of her and she needs to get it out of her. There’s a medical pod on the ship, it can basically can perform all sorts of medical procedures except its set up for a male. Shaw instead of just selecting an abortion she has to finagle it to remove the alien. The scene is so graphic and just creepy, it’s perfect. 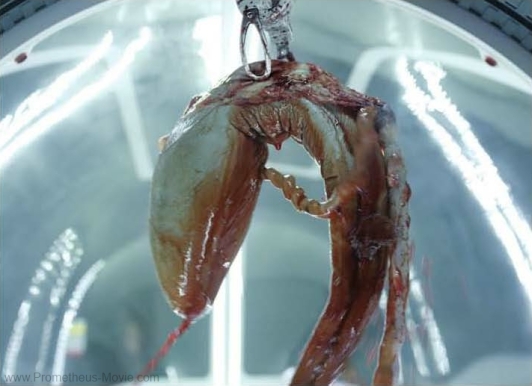 The squid alien is basically the first face hugger, we eventually find that out. Prometheus has an awesome scene like that but then there is a terrible one were two characters are running from a rolling cylindrical object and instead of running in a different direction they just run straight ahead. Such flawed logic. I would say there are more good scenes then bad ones and it’s all worth it in the end to see the first Xenomorph-like creature.