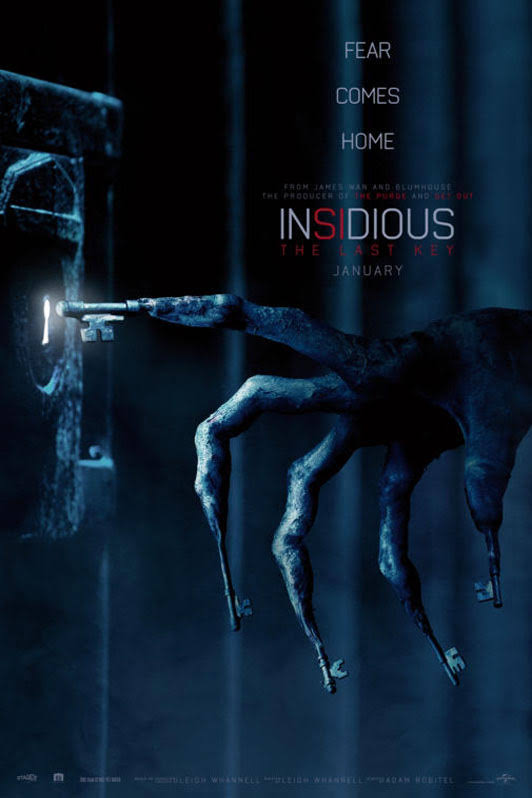 Brilliant parapsychologist Elise Rainier receives a disturbing phone call from a man who claims that his house is haunted. Even more disturbing is the address — 413 Apple Tree Lane in Five Keys, N.M. — the home where Elise grew up as a child. Accompanied by her two investigative partners, Rainier travels to Five Keys to confront and destroy her greatest fear — the demon that she accidentally set free years earlier. – Universal Pictures

Insidious: The Last Key is the fourth installment in the Insidious franchise. The franchise has been doing an odd thing since the second one, which is every film after the second is a prequel because they killed the most interesting character in the first film. Shockingly somehow that strategy has worked so far and most of the films have been received well by fans. The Last Key is mediocre at best but when it’s the fourth in a horror franchise, that’s better than expected. I wanted more out of this film but it could’ve been way worse.

The strongest part of Insidious: The Last Key is Lin Shaye as Elise, she has been the back bone of the franchise, which is remarkable considering she is a 74-year-old woman, so kudos to her. Her acting is one of the best parts of the film, it’s wild that the hero of the film is an older woman. This film gives even more of her backstory, how she got her powers as a child and her troubled home life. The Last Key would’ve been a lot better if it just focused on her backstory instead of the late 2000’s. She’s the shining star in this bland film. Other than her the acting is decent aside from her two sidekicks, Tucker and Specs. Those two are dummies, obviously that’s their characterization, they’re the comic relief. Only like half of their jokes hit though and the rest were super cringe worthy.

Elise is the glue that holds this film together, everything else is trying to pull it apart. This movie felt like three different movies with three different endings. There were multiple parts during the movie, where I thought “this has to be the ending” but then it just kept going on. Another thing that just irked me out was that characters, often the two sidekicks, would know things from conversations they weren’t involved in. Is it really that hard to keep continuity?

My last problem and arguably the biggest one was the villain. Key Face is the big bad scary ghost monster. All of his fingers are keys and if he keys you in the throat you can’t talk. That sounds super intriguing. Furthermore, in the further there’s all these doors and he lives there with all the other ghosts. I bet his keys open the doors to other times and worlds and stuff. The whole movie he is trying to get Elise to open a door. Why can’t he open the door? He has ten keys maybe twenty if his toes are keys too. If he can’t open the doors why does he have key fingers. Nothing makes sense, I just want to know what his deal is. We learn nothing about him and he is defeated in the lamest way ever.

I didn’t necessarily hate this movie. There were some things I liked. For one I loved Elise and her characterization. The idea of an expanded Insidious universe really interests me and there are rumors of Insidious crossing over with Sinister, which I can totally get behind. This was a scary movie and thankful there were a few good scares. Another thing with scares that this movie did was, it didn’t go for the obvious scares. At one point, you would expect a scare because that’s where it normally would be but then it wouldn’t be there and then they’d get you right after when you wouldn’t expect it.

As far as January films go this isn’t half bad. Some decent scares and decent acting to get you through the 100-minute runtime. If they plan to do a sequel, I expect better.

I give Insidious: The Last Key a 5 out of 10, not very likely to watch again.