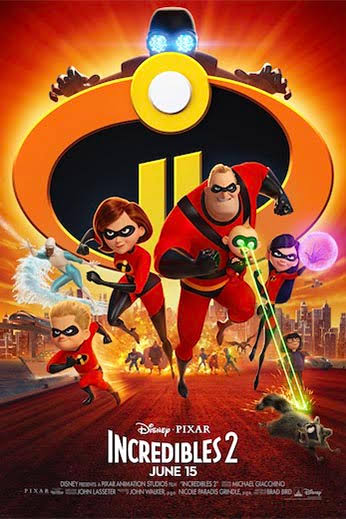 Everyone’s favorite family of superheroes is back in “Incredibles 2” – but this time Helen is in the spotlight, leaving Bob at home with Violet and Dash to navigate the day-to-day heroics of “normal” life. It’s a tough transition for everyone, made tougher by the fact that the family is still unaware of baby Jack-Jack’s emerging superpowers. When a new villain hatches a brilliant and dangerous plot, the family and Frozone (voice of Samuel L. Jackson) must find a way to work together again—which is easier said than done, even when they’re all Incredible. – Walt Disney Studios Motion Pictures

This review is brought to you by the great folks at Heeter Home Team if you are buying or selling a house in Southern New Hampshire, these are the people you want on your side.

Incredibles 2 is the long-awaited sequel to Pixar’s smash hit The Incredibles. Why a movie so beloved took 14 years to get a sequel is beyond me. Incredibles 2 brings Brad Bird back as writer and director. The film takes place directly where the first left us.

Like everyone else, when this movie was announced I was very excited. I have fond memories of the original and was looking forward to the new installment. The marketing for this movie did not do it for me though, the teaser was barely a tease and the trailers where just bland, nonetheless I had high hopes for Incredibles 2 and I was not let down.

Right off the bat, I’m going to tell you I liked this one better than the first. I find the world of the Incredibles fascinating, mainly because of the supers and this movie is chock full of supers. Of course, our favorite family is front and center but we get to see way more of them in action and all the new supers compliment them well.  There’s just a bit more of the world out there to see. I’d really like to see more of this universe and preferably not have to wait another 14 years.

A majority of the voice cast from the original is back. Sam Jackson is great as always. Brad Bird will consistently crack me up as Edna. Holly Hunter and Craig T. Nelson ARE Mr. Incredible and Elastigirl. There are some newcomers too, the original Dash has gone through puberty now and needed to be replaced. Bob Odenkirk is a welcome addition as Winston Deavor. Mr. Deavor is the man I would be if I had lots of money, he is a superhero enthusiast and is doing all he can to legalize them. Jack-Jack doesn’t really speak exactly but he is the best character in the whole entire movie. I don’t want to spoil anything but he is, no pun intended incredible.

I feel like most children movies try to market them as movies for everyone to enjoy but they really aren’t. Incredibles 2 is 100% a movie for everyone, I am 24 years old and I had an absolute blast with it. As a superhero film enthusiast, Incredibles 2 is right up there with the Marvel and DC movies (maybe even better than the DC movies, maybe.) Both Incredibles movies are what the  Fantastic Four movies should’ve been. The action in this is of course tamer than what you’d see in Avengers: Infinity War but it’s still entertaining for everyone and you can still see the seriousness of their situation. Incredibles 2 is so much fun and is funny but it’s not a dumb kid’s comedy, all the laughs are organic. This movie like the first is mature, there’s a lot of adult stuff in the Incredibles, Mr. Incredible got sued for saving a guy trying to kill himself, pretty mature, huh?

As you can tell I really liked this movie a lot and to me it is almost a perfect movie but one thing made sure I didn’t give Incredibles 2 a 10/10, the villain. The Screenslaver, cool name and cool design but gosh darn he was so predictable, I could see everything coming from a mile away. There’s a big twist in the film regarding the Screenslaver and I called it right from the beginning.

Regardless of the lackluster villainy in Incredibles 2, it’s a blast from start to finish and really is a movie for all ages.

And don’t forget if you are looking to buy or sell a home, check out the Heeter Home Team.