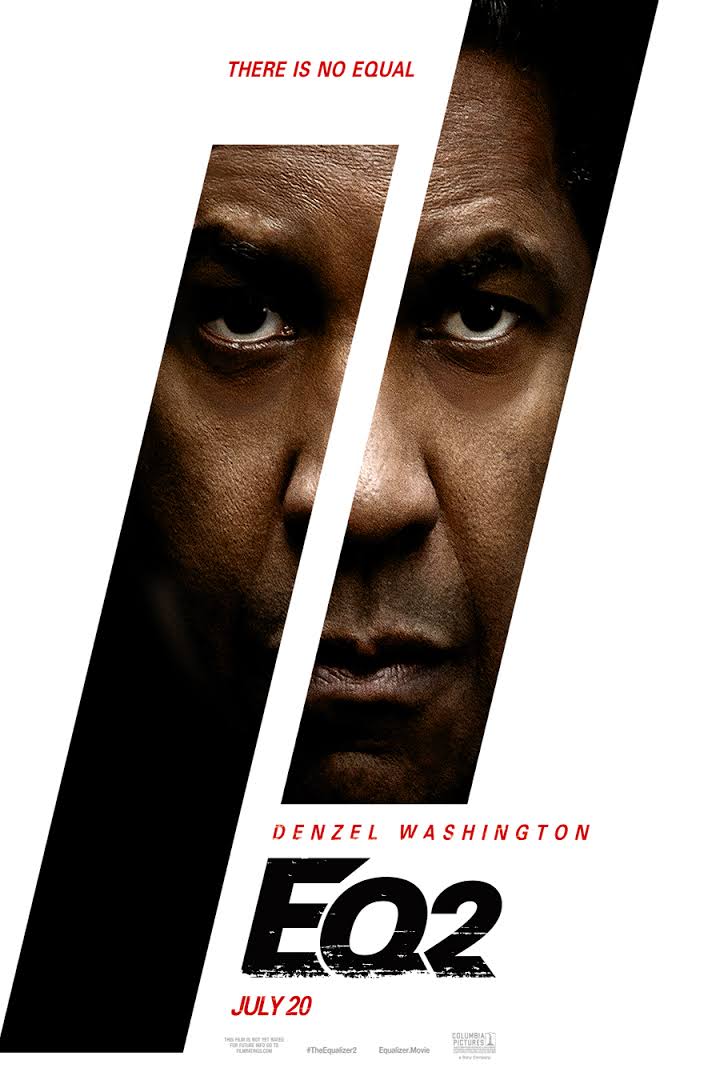 If you have a problem and there is nowhere else to turn, the mysterious and elusive Robert McCall will deliver the vigilante justice you seek. This time, however, McCall’s past cuts especially close to home when thugs kill Susan Plummer — his best friend and former colleague. Now out for revenge, McCall must take on a crew of highly trained assassins who’ll stop at nothing to destroy him. – Sony Pictures Releasing

The Equalizer 2 is written by Richard Wenk and directed by Antoine Fuqua. This movie brings the boys back together; Denny and Antoine are back baby. The pair are often collaborators and they usually deliver solid if not great flicks, looking at you Training Day.

The Equalizer came out a few years ago, it was one of those movies that I remembered thinking that looks pretty good and then never saw it. The Equalizer is one of those movies some people are weirdly passionate about, it’s a good movie, you can’t go wrong with Denzel and Fuqua. but it’s nothing special. And I can finally say that because I watched it for the first-time last week, solid film but nothing to write home about or make a sequel about, but Hollywood did it again.

The Equalizer 2 is getting a lot of mixed reviews right now and I get why, some liked the first better others liked this one better, it’s just more of the same. I don’t think this movie needed to exist at all but I did enjoy it more than the first, neither movie is bad, Denzel duh. This movie is oh so far from perfect but it’s an enjoyable action romp, that’s aesthetically appealing, directed well and full of tension, comparably to a less good John Wick.

This movie is way too long, 2 plus hours, or at least that’s what it felt like. If this movie was a quick 90 minutes people would be loving it. To add further insult to injury it takes way too long for the actual plot of the movie to start. Denzel is helping people now, we saw that at the end of the first, it’s a cool concept but we don’t need to see him doing that for 40 minutes, give us the steak before we full up on bread. I was invested in a few of the side missions, shout out to Miles, a neighborhood kid he takes under his wing, I was fully invested in that side plot. Overall the movie would’ve benefited from a quicker start. Once the main plot was revealed, the film found its legs. It’s a bit of a murder mystery and it was far more compelling than the main story line of the first. Through this mystery we learn more about Denzel and his past, he still has that aura of mystery but a little more depth was added to his character. This story line revealed that he isn’t just good at killing people, but a bit of a detective too. And as an added bonus this story line brought us Pedro Pascal, who kills it in everything I’ve seen him in. The Equalizer 2 was no difference, he was a welcome addition.

Denzel is the same, the action is the same but the story is a bit better and equalization is served. The Equalizer 2 is worth a watch but you can wait until it’s on cable unless you gotta see Denzel on the big screen, which is a valid excuse.

I give The Equalizer 2 a 7/10 will watch again on cable or buy the Blu-ray because I have the first and I’m a completest.