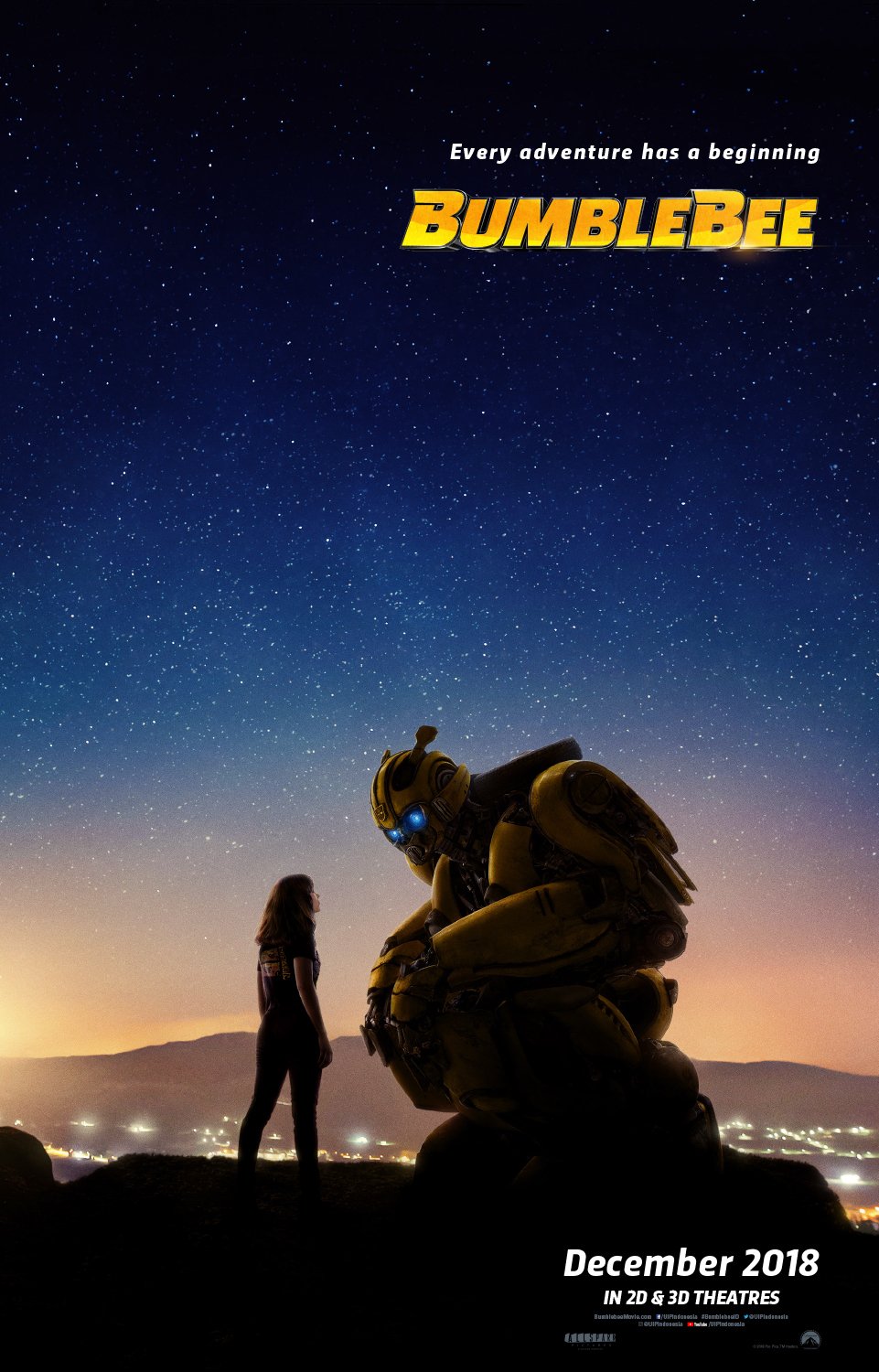 On the run in the year of 1987, Bumblebee finds refuge in a junkyard in a small Californian beach town. Charlie, on the cusp of turning 18 and trying to find her place in the world, discovers Bumblebee, battle-scarred and broken. – Paramount Pictures

Bumblebee is the sixth installment in the Transformers franchise and the first one not directed by Michael Bay (thank god.)  Instead of Bay, Travis Knight seats in the directing chair. Before Bumblebee Knight had only directed animated films, so this is quite an ambition jump. Christina Hodson wrote this film and has also written the upcoming Birds of Prey film.

I was pretty down on this movie from the beginning, Like many twelve year old boys I loved the Transformers movies, Megan Fox, explosions, weird robot noises, cars and did I mention explosions—this are all things boys just beginning puberty love. As I got older I realized the movies weren’t as great as I thought. I will still tell you 1-3 are fun enjoyable movies, not perfect by any stretch but definitely a good time. The fourth one is where I gave up all hope and I didn’t even waste my time on the fifth one. I had become disillusioned in the franchise. I didn’t want anymore Transformer movies. But Paramount decided we needed a Bumblebee movie. Myself and many said “no thanks.” Then Paramount said it’s a prequel and it’s set in the 80’s. But we were still like “nah that’s cool we good.” This movie was fighting against all the odds but somehow it prevailed.

Bumblebee was a goddamn blast. I was born in the mid 90’s so for some odd reason, I have an affinity for the 80’s (thanks Stranger Things and the Karate Kid.) At first I scoffed at the idea of making this a prequel but boy was I wrong. This isn’t exactly a reboot but thanks to the setting Knight and Hodson weren’t tied down by the previous films. This is a self contained movie, the scale is small and it’s a good thing. Every other Transformer movies involved the chance of the world ending which lead to them being derivative and bloated. By making Bumblebee a self contained smaller scaled story we are able to actually care about Bumblebee and the characters instead of waiting for the next explosion.

Overall this was just an enjoyable movie. Hailee Steinfeld was delightful—she just super likeable and charming and she plays the quirky girl thing perfectly. This also the first time a Transformers movie has been female led so, that’s pretty cool. This was a gorgeous film and felt so faithful to the old cartoon. The bits of this movie that took place on Cybertron looked like it was stripped straight from the old cartoon. All the Transformers looked fantastic and not nearly as over the top as the previous incarnations. I understand Transformers aren’t real but they looked so much more realistic, at least by the standards the cartoons had set.  There wasn’t too many action set pieces but when we were given one it wasn’t bogged down by a gajillion explosions and there was a little more substance. All this was back dropped by a kick-ass 80’s soundtrack.

I’m a little late here but go see Bumblebee, it had no right being as good as it was. It took 6six tries before they made a good Transformers movie but they finally did it.  This movie is perfect for right now, it captures the feel of a summer movie giving you an escape from the summertime blues. No complaints other than that John Cena was not in this movie nearly enough.

I give Bumblebee an 8 out of 10, would watch again.

“My mom got it from Weight Watchers.”